Beetlejuice, a Zombie, a Woodland Elf, and a T-Rex 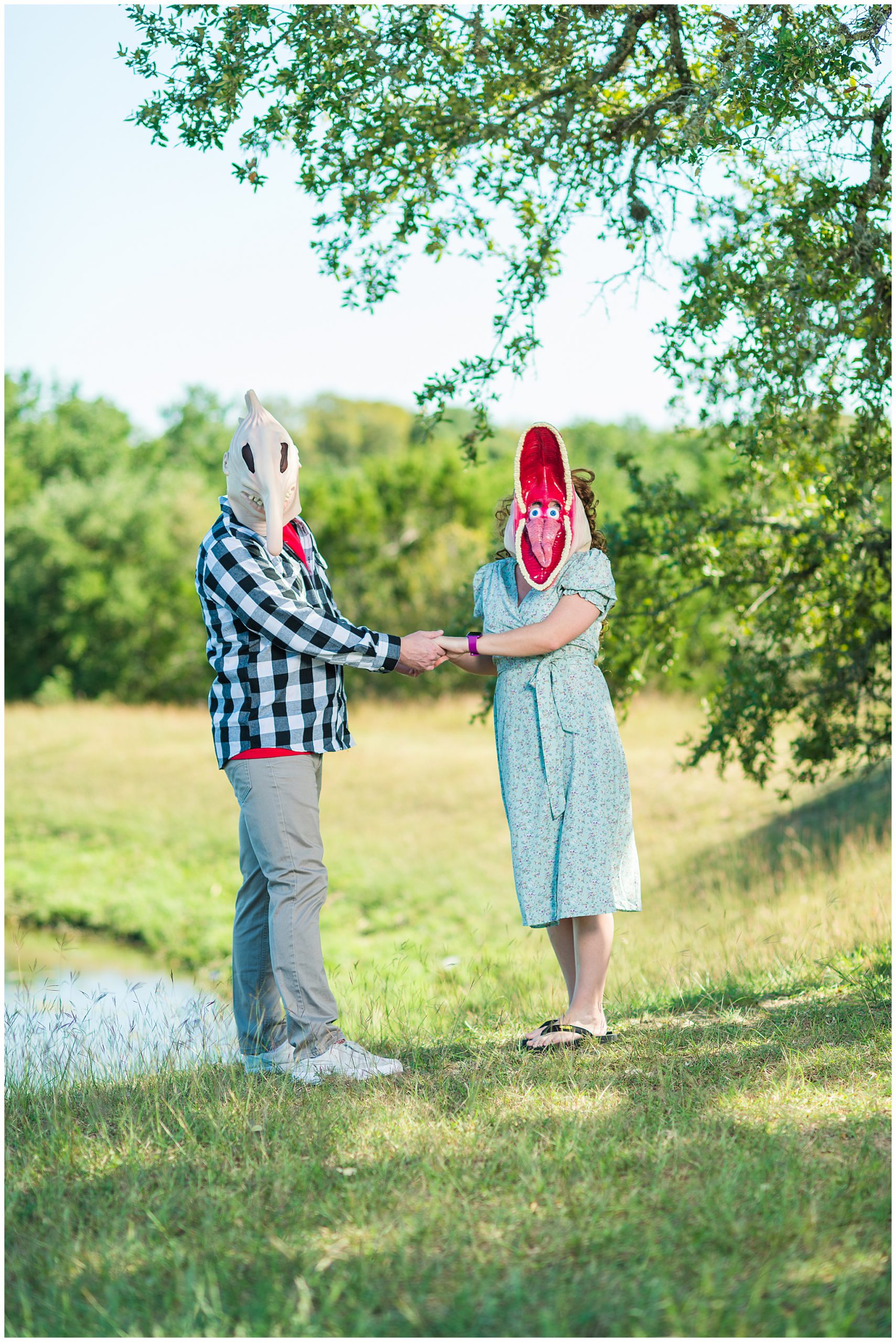 This is the year that I convinced my husband to wear a mask for Halloween!  I know, it doesn’t seem like a big deal, but it REALLY is!  Lee has always been pretty laid back and understated when it comes to Halloween costumes.  But for some reason he agreed to my outrageous request and I’m still laughing about it.

If you haven’t seen the 1988 movie Beetlejuice with Michael Keaton, Geena Davis, and Alec Baldwin you’re missing out! My connection with this movie is so strong and not just because my name (Lydia) is Winona Ryder’s character.  The magic and silliness of this Tim Burton film has stuck with me through adulthood.  I often remember these silly scenes and replay them and giggle about it.  But this year my kids were old enough to see it, with some fast forwards here and there.  So now I feel like they’re in on the joke!

The Maitlands from Beetlejuice 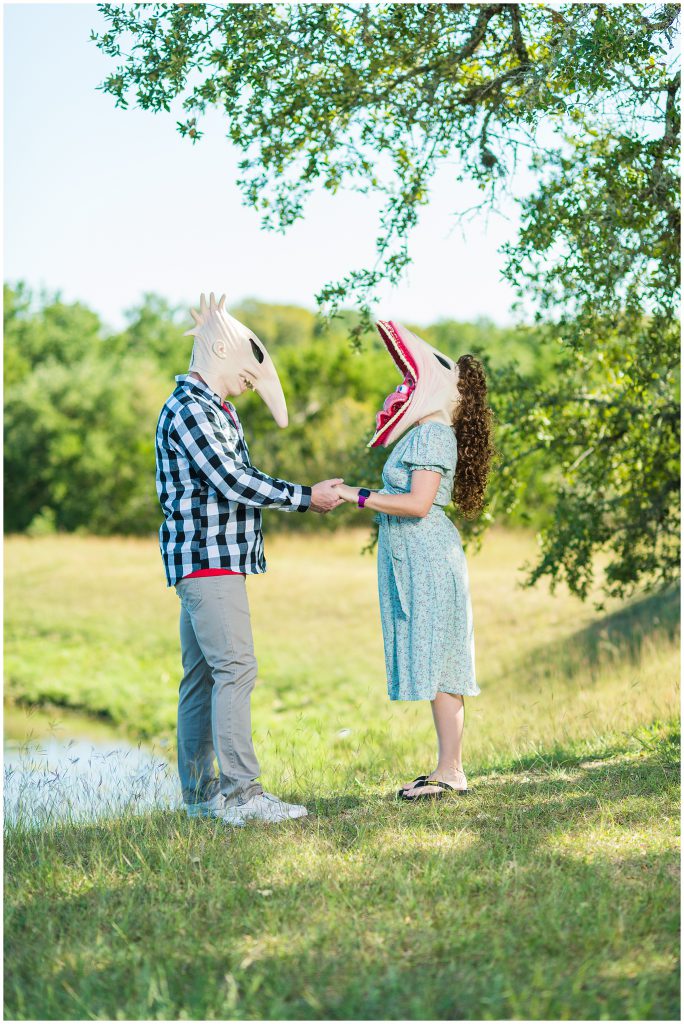 I thought this pond would be the perfect spot to take these shots.  Plus it was super convenient to get to in our neighborhood.  I brought my tripod out, and when my kids see that the tripod is out…they know I mean business.  Self-portraits are about to happen!  I also got to play with my big strobe which allowed me to light these shots in full sun at around 3pm on a clear day.   So I have the tripod and my strobe on a stand and of course people are driving by, which always makes me wonder what people think.  Especially since I’m hanging out with the other shady characters below.  Thankfully, it was just my neighbors and they know me well enough by now to just have a good laugh.  We spent about 45 minutes getting all these shots and I had so much fun getting back into the swing of shooting and posing.  Photography is always about getting the most out of the current set of variables.  An incredible puzzle to solve!

Which one do you think I should frame?  Maybe next year I can find their suit and wedding dress and we can reuse these masks! 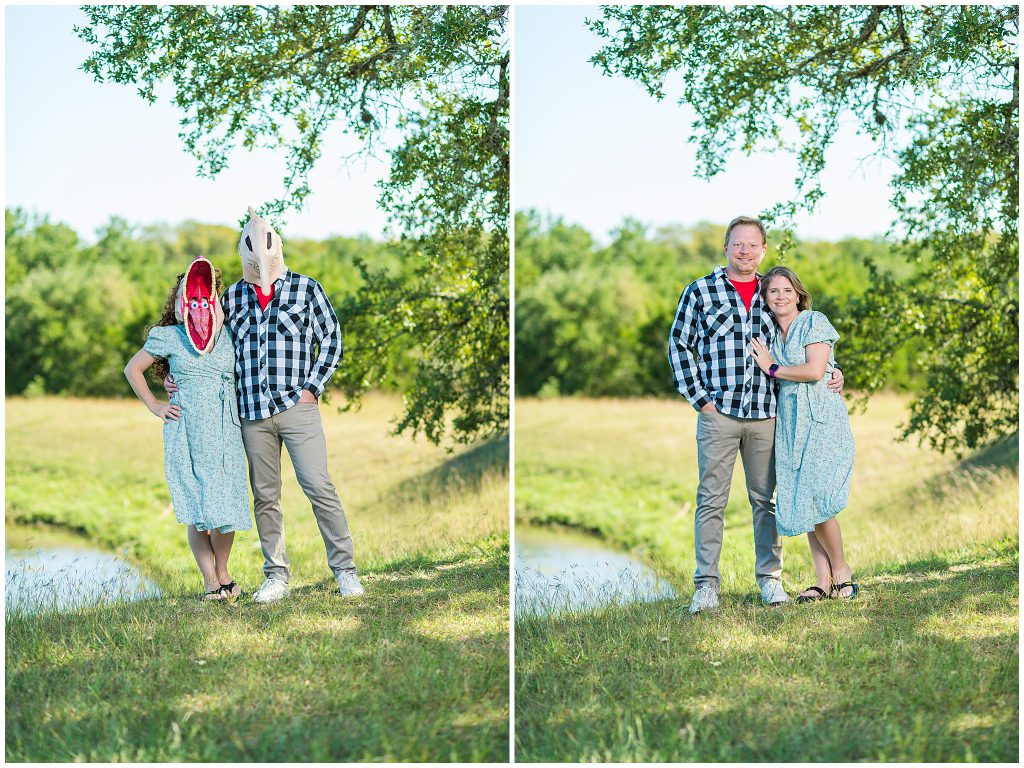 My youngest decided to do a spooky costume this year.  She wanted to be a zombie.  I found this Scary Stories book from when I was a kid and she’s been reading it like crazy!  I may have also been obsessed with it as a kid.  I could likely recite a few of the poems from memory.  But I will save you from that!  Anyway, we bought some gray face paint and I used various shades of green, purple, and gray eyeshadows to create her look.  Abby loved all the attention and would sneak a peek of herself in the mirror at every chance.  Thankfully the day was nice and warm so we didn’t have to worry about jackets.  She got a little tired and hot, so I had her just read her book in the grass.

I love her sideways ankle in this shot. She does that when she’s thinking. 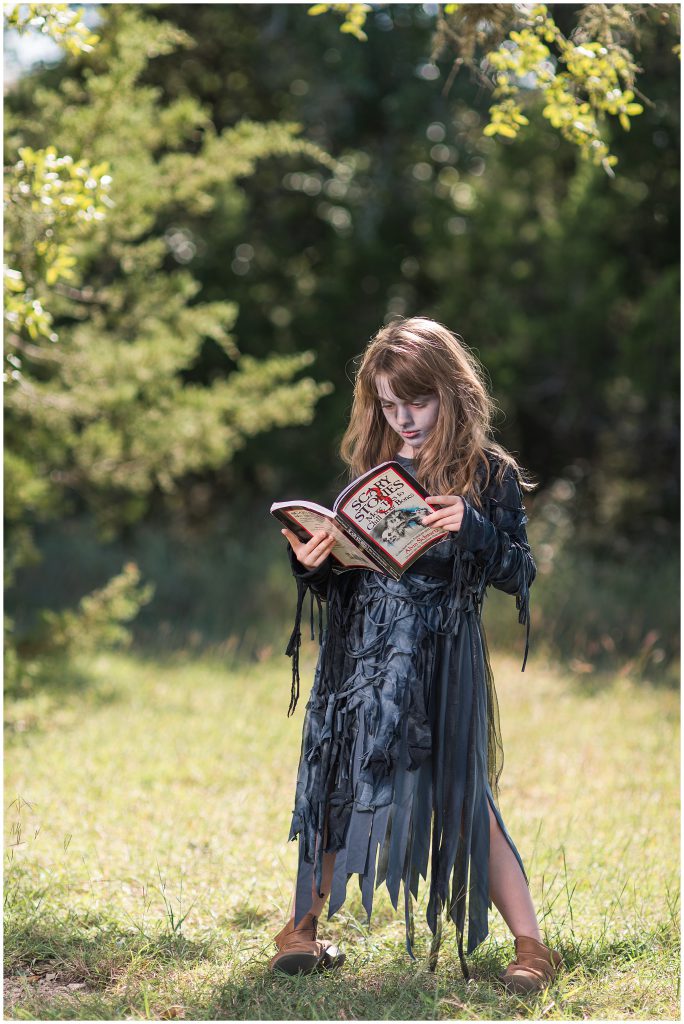 My middle daughter, Ellie decided to dress up as a Woodland Elf.  She made this costume up and chose each piece and I thought she looked really cute.  We started out inside the house where I was casually showing her how to use fairy lights in photography and that’s my favorite shot! She’s starting to be interested in video production and she’s taking a class at school so we get into some fun conversations.  Then I found my glass sphere and I thought how that would add some mystery to her character.  She had a lot of fun pretending to “see the future” and “cast spells”!  And this hooded cape! Can we just talk about this thing? It’s velvet and looked amazing for a Woodland Elf! I must confess that Ellie has always been my muse since she was little and I just started to learn how to manually shoot my camera.  She would sit with me and we’d “play photography” and she would actually listen to my posing instructions.  Meanwhile, her brother was off acting like a Monkey. 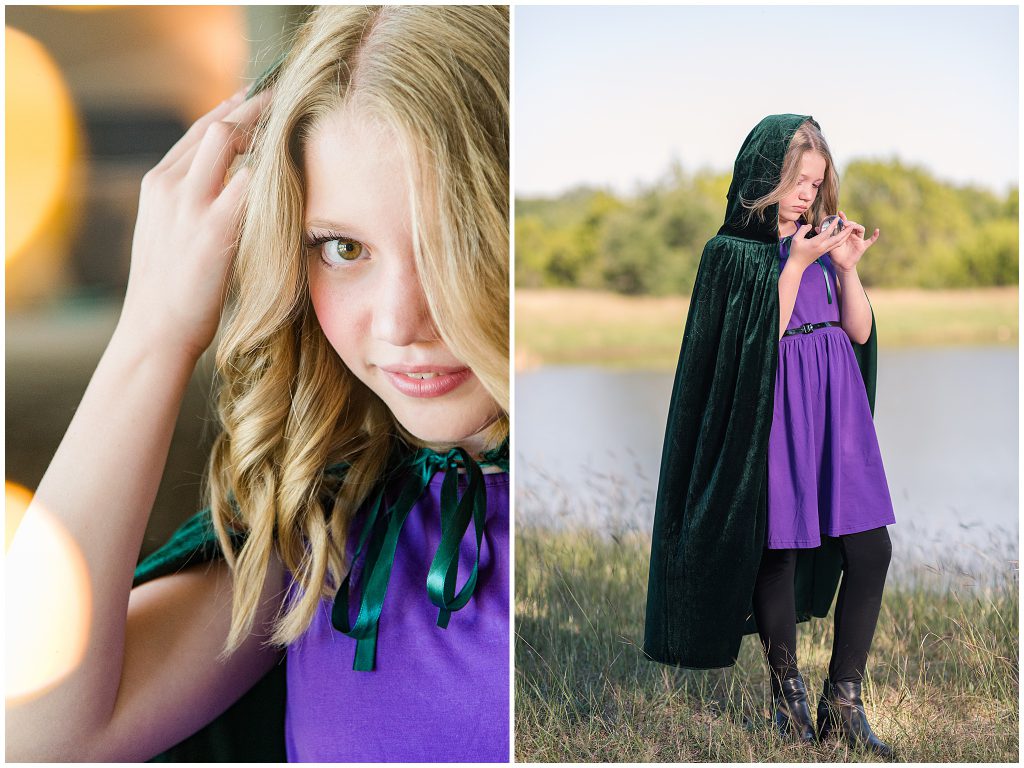 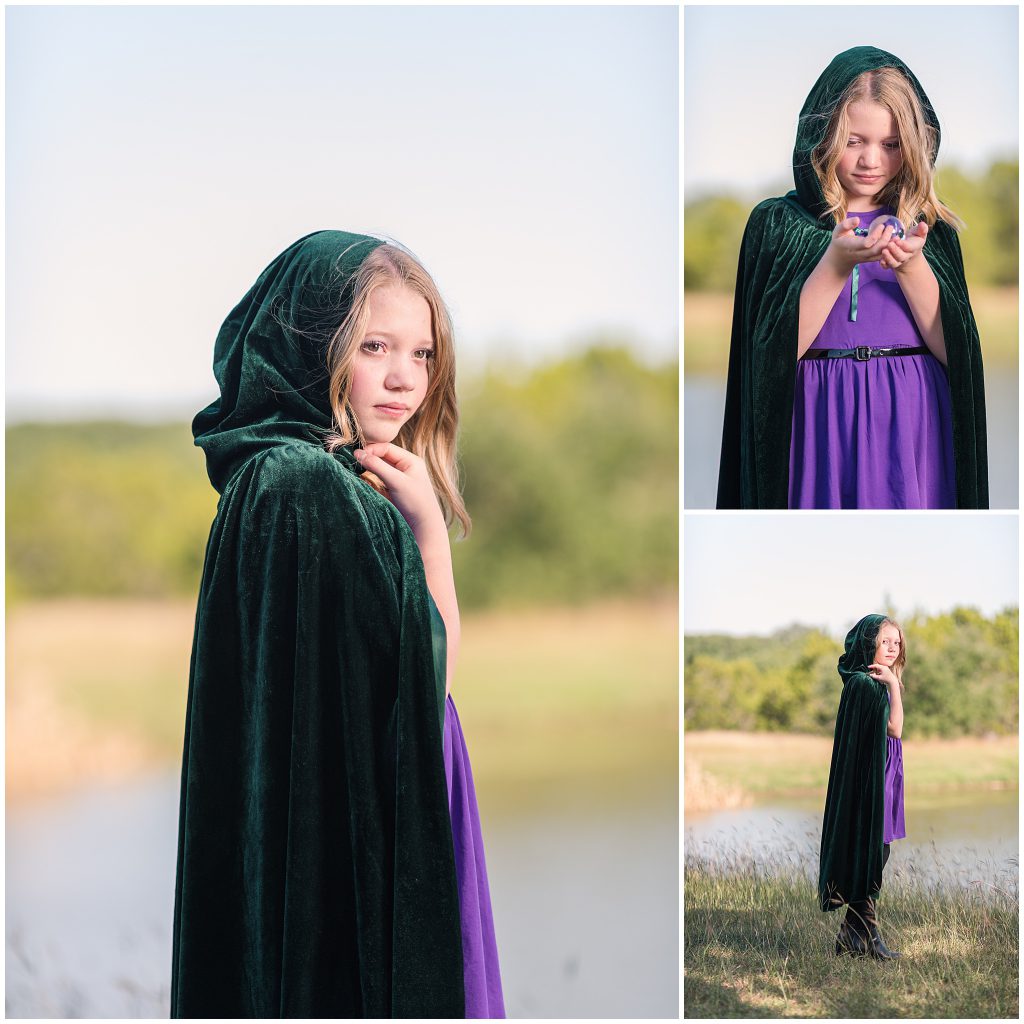 Speaking of Simon…I don’t even know where to begin.  He’s a teenage boy with crazy teenage ideas.  Based on his suggestions for a costume which really only boiled down to…it must be inflatable.  So based on time constraints for delivery, he ended up being a giant 7 ft tall inflatable T-Rex.  We couldn’t even see his face! And he couldn’t hear me over the whirr of the fans from a distance.  I’m sure we looked absolutely ridiculous trying to get these shots, but I think it was worth it!  He thought he looked awesome and that’s what really matters. 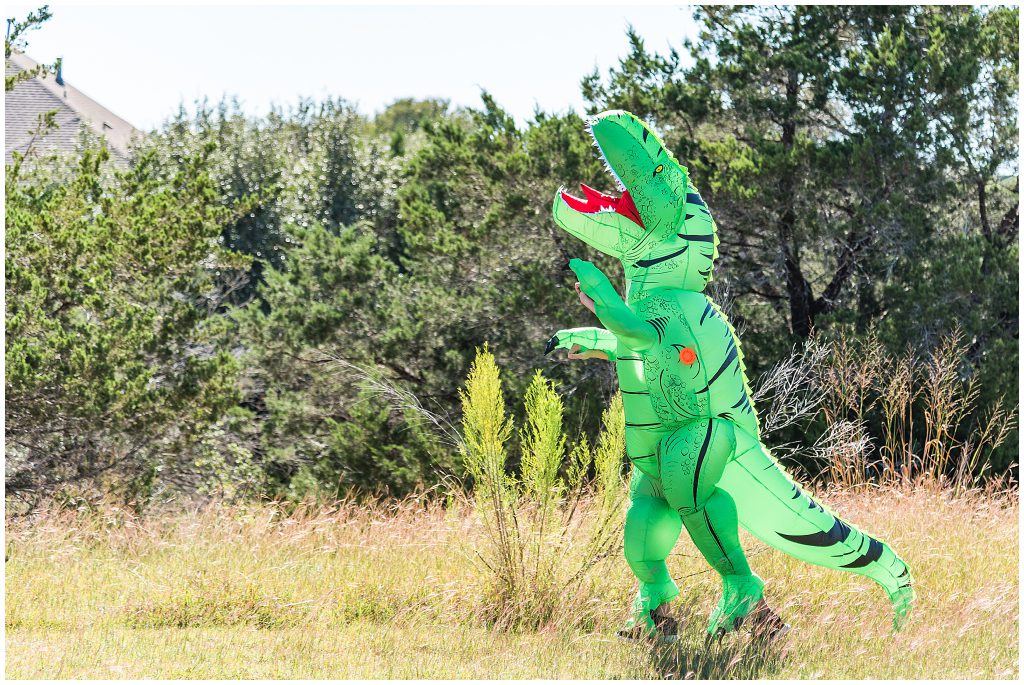 You can almost catch a glimpse of his face in the photo to the upper left. What a scene! 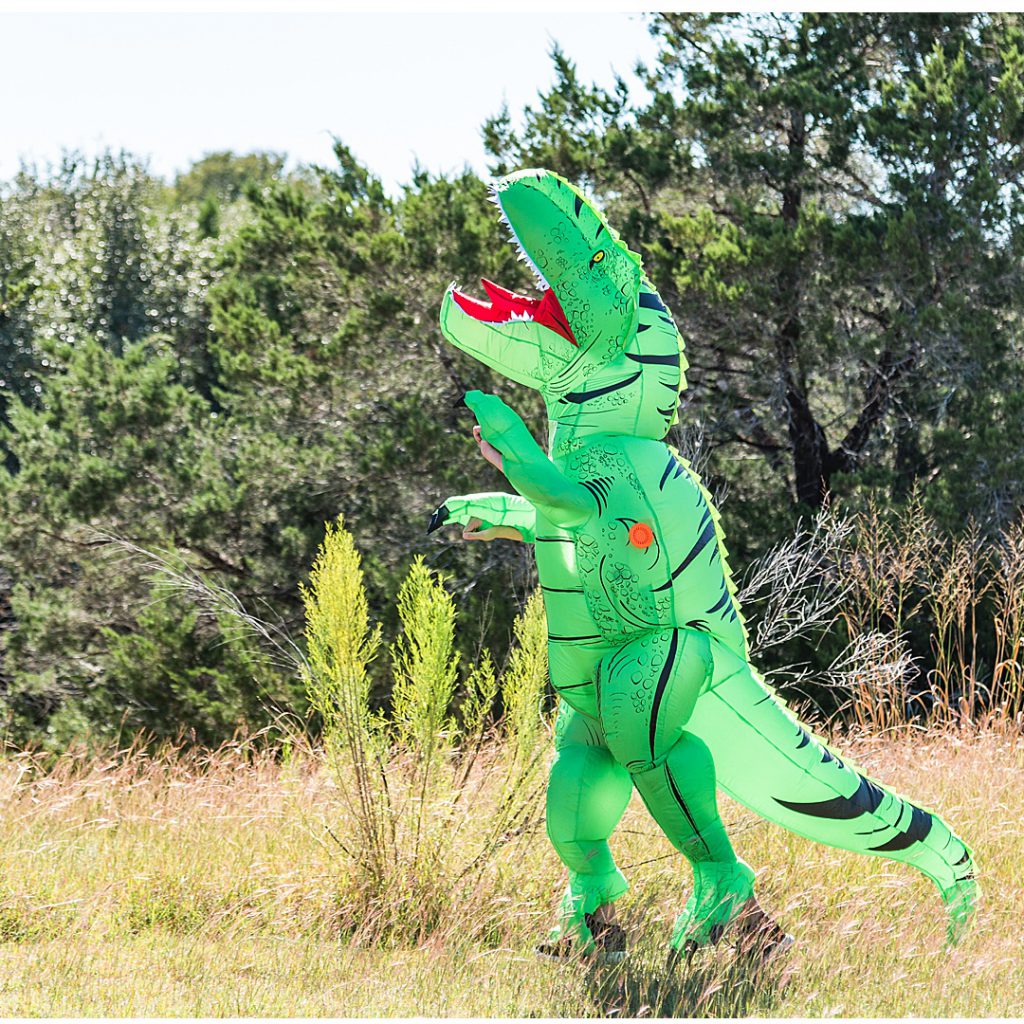 Overall, I’m really happy with the location choice for this impromptu Halloween session with my family. I had spent a couple days thinking about where to go and how to shoot it. Just playing with ideas. I’m still learning about the area and starting to catalog locations for different types of Photography Sessions.  Still exploring Austin and the surrounding areas to find all kinds of hidden gems.